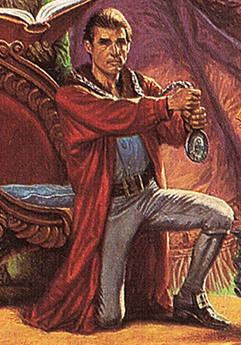 Ben Holiday was the King of Landover.

Experienced in dealing with people and laws. Compassionate, honourable, far-sighted.

Came from a wealthy family: his mother had been born into money and his father made his in futures. Both were dead and he had no brothers or sisters. He had some distant cousins on the West Coast and an uncle in Virginia, but he hadn’t seen any of them in over five years.

As a teen he was a competitive boxer, at one stage being a silver glover. Other interests and going away to school prevented him from progressing further, and as an adult he only boxed to keep himself in shape.

After Annie’s death, Miles appeared to be his only real friend. He had always considered himself to be an outsider and that he didn’t belong; Annie’s death appeared to reinforce this belief.

His favourite drink was Glenlivet.

Was nick-named “Doc” by Miles, a name that drove Ben nuts.

Was fascinated with puzzles and challenges that others would avoid.

Saw the advertisement for the sale of Landover in the Christmas Wishbook. After some deliberation he travelled to New York to meet Meeks and decided to proceed with the purchase. He was given airline tickets to take him to Virginia where a car had been reserved for him. He was also given a map to show him where to go in Virginia. When he picked up the car he received a small parcel which contained a letter from Meeks and a medallion.